Akshay Kumar turns 45 today and to say that the year gone by has been nothing less than eventful would be stating the obvious. Between last September and now, he started on an average note with ‘Desi Boyz’ before ‘Housefull 2’ turned around the fortunes. There was no looking back as ‘Rowdy Rathore’ further reaffirmed his position as a superstar and while ‘Joker’ turned out to be an aberration, Akshay has definitely moved on. In a month where he celebrates not just his birthday but also awaits the arrival of a new member in the family, Akshay would also be seeing the release of first of his five movies releasing over next 12 months. 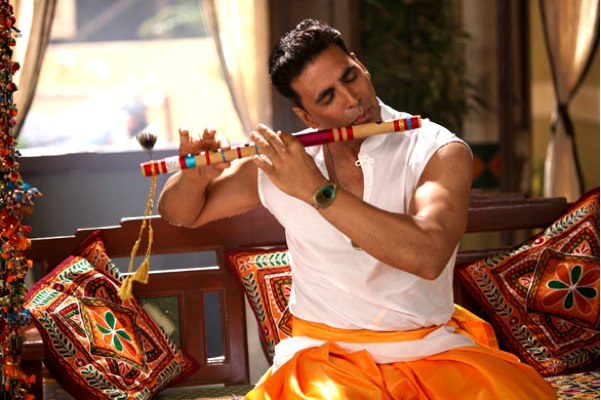 Even though Akshay has an extended guest appearance in the film, ‘OMG – Oh My God!’ is carrying an all around positive buzz around itself. With Paresh Rawal in his elements, the songs doing well and 2012 already seeing quite a few unconventional films doing well (Kahaani, Vicky Donor, Paan Singh Tomar), this Umesh Shukla directed film should be (hopefully) no different.

Post the film’s announcement and commence of release, not much has been written or spoken about ‘Khiladi 786’ other than a stray snippet or two being shared by the makers. Though this gave a few an impression that the film may be postponed, that’s far from being true. The film releases as scheduled in December and its promotion should begin soon.

The film’s announcement made some good buzz since it marks the coming together of ‘A Wednesday’ director Neeraj Pandey with Akshay Kumar. However the film’s shoot has been spread out for close to a year. Though nothing (actually make it ‘absolutely nothing’) about the film has been revealed so far, the intriguing plotline promises an engaging drama in the offering.

This is one film which is what blockbusters are made of. What ‘Rowdy Rathore’ was in 2012 could take gigantic proportions in the form of ‘Once Upon A Time In Mumbaai 2’ next year. A big ticket film for Akshay, it has quality and smart marketing written all over it, what with Milan Luthria and Ekta Kapoor coming together. Imran Khan and Sonakshi Sinha only add on as bonus elements.

While a formal announcement around the film is yet to be made, surprisingly there have been tid-bits already thrown around the film’s possible release on Eid next year. Since no one, including director Anthony D’Souza, has gone on records yet, it can be safely presumed that right from the exact title to the eventual cast to the shooting schedule to the release date are all tentative as of now. Let’s wait and watch!

While the line up of movies in 2012 – 2013 indeed seems quite loaded, it is your chance to pick and choose your favourite of the lot. So which of these Akshay Kumar films excites you most?