Story: A young girl from an Urban city Veera Tripati (Alia Bhatt) is on the highway at night with her fiancé. They are about to get married in four days. Suddenly, her life is swung away from the brocade and jewellery of marriage to the harsh brutality of abduction. Her life will never be the same again. The same night, the gang is in panic. The girl is a big industrialist’s daughter. His links in the corridors of power make ransom out of the question. They are doomed. But the leader of this group, Mahabir Bhatti (Randeep Hooda) is adamant. For him sending her back is not an option. He will do whatever it takes to see this through. But as the days pass by, the scenery changes, the light changes, the sun sets and rises and the air changes, she feels that she has changed as well. Gradually, a strange bond begins to develop between Veera and Mahabir. It is in this captivity that she, for the first time, feels free. She does not want to go back but she also doesn’t want to reach where he is taking her. She wishes this journey to never end. 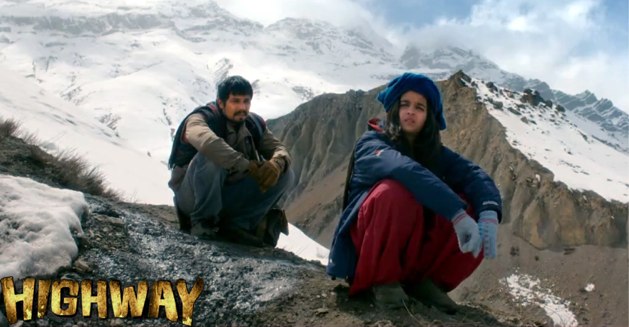 Short Review of Highway: Imtiaz Ali, a master at directing rom-coms, veers away from his comfort zone to direct a road film. Highway starts very well. The first half, apart from being a visual treat, has plenty of moments that could qualify as Imtiaz’s best. He successfully manages to create a fantasy world, with a lot of heart and energy. Unfortunately, the second half fails to match-up to the first. The story suffers from being a little too hard to digest, to sometimes getting way too predictable. More on that in the detailed review on Friday.

Technically, the film is brilliant. The entire technical team deserves an applause as they infuse life into a not-so-glamourous film. The background score is top-notch, the editing is crisp. The lighting, setting and locations are in tune with the mood of the film.

A.R. Rahman’s music gives Highway its soul and Anil Mehta’s cinematography make even the milestones on the highway look so beautiful.

Alia Bhatt breaks free and delivers a fabulous performance, she is outstanding as Veera. With Highway, Alia grows from a student to an actor! Randeep Hooda is a sheer delight on-screen. Right from his diction to his body language and expressions, Hooda delivers a flawless performance. The supporting cast is top-notch. Quite a few unknown names excel in the film.

Overall, Highway is a soul-stirring film that may not rake in the moolah at the box office, but will touch your heart. Watch it for Rahman’s fabulous compositions, brilliant performances and Anil Mehta’s camerawork.

At the box office, the film is expected to take a slow start and then grow with word-of-mouth publicity.

More in the detailed review on Friday.
Advertisements