Rana Daggubati brought Baahubali to Karan Johar who then helped make it a pan-India movie. So when they bring the same combination once again with another unique looking film, expectations are sure to be raised. The Ghazi Attack’s promos have promised a taut suspenseful thriller the likes of which we haven’t seen before in India. Does it deliver on its lofty promises?

Story: The Ghazi Attack is inspired by true events from the 1971 Indo-Pakistan war. The story is about an executive naval officer of the Indian Submarine S21 and his team, who remain underwater for 18 days. The film explores the mysterious circumstances under which the PNS Ghazi sank off the coast of Visakhapatnam in 1971. It is an underwater tale of the courage and patriotism of the men aboard the Indian Submarine S-21 who destroyed the Pakistani submarine PNS Ghazi when it ventured into Indian waters to destroy the INS Vikrant.

First time director Sankalp Reddy has claimed to have lived in a submarine for a year to research for this movie, and the detailing which he has put into it has been minutely planned. Only experts of underwater war can find faults with the detailing in this movie. Reddy keeps the action rooted to the submarine and makes the plot condensed as far as possible. It does get a bit monotonous with all the action and war dialogues but he does well to get the pace back and ends up making a very good action thriller. And it looks very unique too. However, he could have done better by showing us a better glimpse of the personal lives of the main characters. 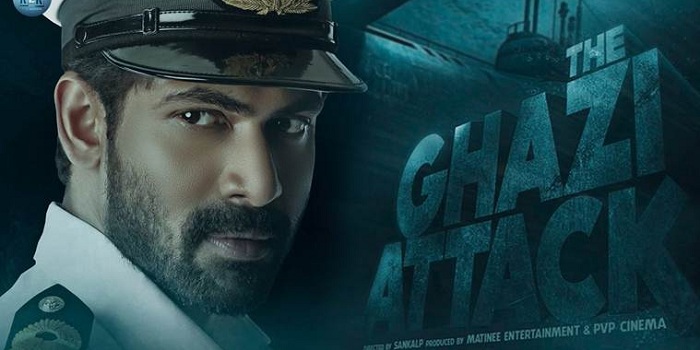 The Ghazi Attack has sensational production values, the likes of which we really haven’t seen in a Bollywood movie. It is not just because the movie looks big in scale but also because the interiors of the submarines don’t look like caricatures. The action is well thought out. The editing is also pruned as it doesn’t get too long. The Ghazi Attack works because the technical departments work in tandem with all other departments.

Acting: Rana Daggubati can carry a film in the Telugu film industry, but can he do the same with a Hindi movie? Suffice to say, he does his job well in The Ghazi Attack. He comes across as calm and dependable. His physique doesn’t overpower his performance. Kay Kay Menon almost hams his character up but manages to redeem himself with the more emotional scenes. Atul Kulkarni is always good and this movie is not an exception. It was a pleasant surprise to see the Late Om Puri in the movie. Taapsee Pannu’s cameo wasn’t really needed but she does okay in her part.

Conclusion: The Ghazi Attack mostly delivers on its promises. It is a solid, suspenseful, taut thriller that stays true to the story without going overboard on its jingoism. It isn’t perfect, there are certain plot points which are unnecessarily added and certain characters aren’t etched out well. But having said that, The Ghazi Attack should be watched because of the unique experience it provides. It is doubtful another submarine movie with such high production standards will release in Bollywood anytime soon. So as long as it is there in theatres, it deserves to be watched.