There has been a lot of trouble plaguing the release of Udta Punjab, which has mainly occurred due to the convoluted and old mindset of the censor board. There’s a lot which has been said about it and we don’t really want to get into the controversy here. The trailer of the movie has given a very realistic and gritty vibe to the movie. Does Udta Punjab live up to expectations? No better time to find out.

Story: Udta Punjab follows the lives of 4 different people. There’s Tommy Singh (Shahid) who is hooked to drugs and can’t make music unless he is coked up. There are hundreds of youth in Punjab who look up to people like him. He gets caught by a rogue police officer turned a good Samaritan Sartaj (Diljit). He almost lost his brother because of drugs. He is friends with Preet (Kareena) who is a doctor working to rehabilitate drug affected patients and is also a part time reporter. Then there’s Pinky Kumari (Alia) who is a migrant hockey player from Bihar who chances upon a packet of drugs.

Screenplay and Direction: Abhishek Chaubey has masterfully addressed the menace of drugs in Punjab with a sense of realism and urgency that has never been achieved in a mainstream form. His victory lies in the fact that he manages to show us a world which we are not used to seeing, but keeps it entertaining throughout. That’s how a good director takes a good story in the written form to a good movie in the cinematic form. The screenplay does get a big prosaic in the second half, but by then all is forgiven as Abhishek has already managed to win us over by then. 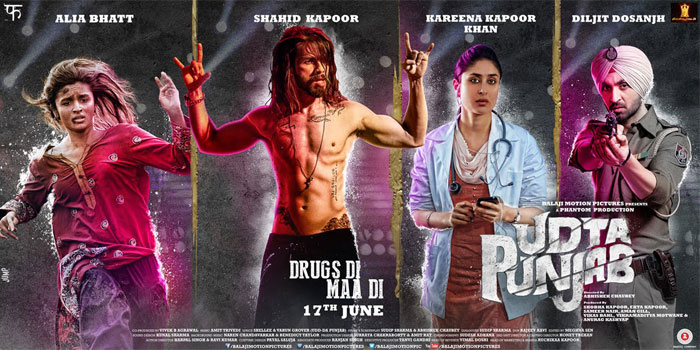 Another one of Udta Punjab’s victories is how the story seems rooted to the ground because it is so well brought together by all the departments. The production design and the costume design get full marks for their consistency and effort. The editing is quite fast, moves along really well and makes the film a brisk ride. The music by Amit Trivedi suits the nature of the film. The title song, Ik Kudi, Da Da Dasse all take the film to the next juncture without making the songs seem unnecessary.

Acting: All the 4 main actors of Udta Punjab deserve praise for their performances but the standout performance in the movie is that of Alia Bhatt. She showcases the vulnerability and ignorance of an illiterate hockey loving Bihari migrant girl beautifully. We are amazed by her sheer talent. Shahid Kapoor also lends a sense of masochism to his character and makes it easy to despise a character like his. Then there’s Diljit who is abnormally subdued in this movie and does very well to showcase the change in his character from a rogue money loving policeman to a good cop. Kareena lends a sense of credibility to her part as the doctor and manages to tie the film together.

Conclusion: Udta Punjab is a very brave attempt at showcasing one of the many problems that is affecting our society today. The best thing about it is that it doesn’t shy away from the main issues but neither does it toe the line of diplomacy. It deals with such a strong issue and the abuses give it a sense of realism. Abhishek Chaubey has mastered the art of delivering such strong movies related to such immensely important social issues. Udta Punjab is a must must watch.