It’s that time of the year when the audience expect a classic from Aamir Khan. Some of his slightly off-beat story-driven films like ‘Taare Zameen Par’, ‘3 Idiots’ and ‘PK’ have achieved the rare combination of critical acclaim and commercial success. This year, Aamir returns with yet another film for which he has dedicated nearly 2 years of his life. From gaining 30 kilos of weight to losing it all to play the younger character, Aamir put his health at risk to physically transform himself. All for one film. Is it worth all the effort that has gone into it? Is Dangal yet another classic from the superstar? No better time to find out than now.

Story: Dangal is about Mahavir Singh Phogat (Aamir Khan) and his two daughters Geeta (Fatima Sana Shaikh) and Babita (Sanya Malhotra). Mahavir’s dream is to have a son who he hopes to nurture and train, so that he becomes a top wrestler, who can win medals for the country. His dream is shattered when he and his wife (character played by Sakshi Tanwar) are blessed only with daughters. Mahavir later realises that his daughters are stronger than most boys in the locality. He decides to train them, hoping that they can someday win gold medals for the country. The story has many other angles including the one where Mahavir realises that his vision may not actually be best for his two champion daughters. 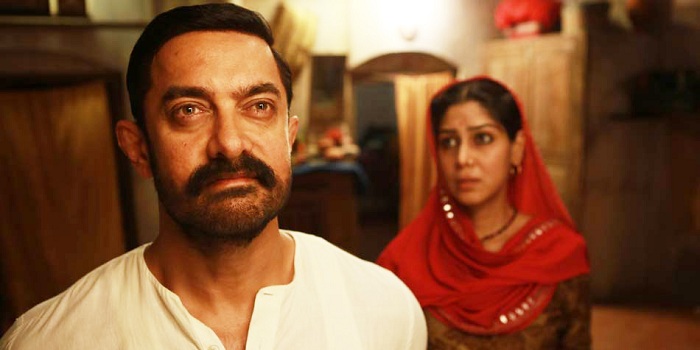 Review: Dangal is one of those films that has a lot to offer, so much that it’s difficult to absorb it all in the first viewing. Not only is the film entertaining, but it also serves up an inspiring life-journey of two daughters who are put through rigorous sessions of training and hard work, only to eventually learn to take their own decisions and even better their own champion father. Dangal has life-lessons, but the film never gets preachy. The wrestling sequences can get boring after a point, but  it has humour and emotions to keep the audience involved throughout. Nitesh Tiwari excels both as the co-writer and director, it’s easily the best film of his career.

Dangal shines when it comes to the technical aspects of the film. The cinematography (Sethu Sriram) is top notch, the heartland of India and the rustic feel of its beautiful villages has been captured in the best possible way. Editing (Ballu Saluja) could have been better, the length should have been shorter as Dangal feels a little longer than it should. The music (Pritam) is excellent and blends well into the film.

Acting: Aamir Khan is outstanding as Mahavir Singh Phogat. Words cannot describe the amount of effort that the actor has put into Dangal. Whether it’s his dialogue delivery, expressions or body language, Aamir gets everything right. The rest of the actors are perfectly cast too. Fatima, Sanya and Sakhi Tanwar are brilliant in their roles. The child actors play their parts very well too.

Overall, Dangal is one of the best films of 2016. Aamir’s performance and effort alone more than deserves the price of the movie ticket. It may not be a film that would be liked by those who seek an out-an-out entertainer, but Dangal is an experience that should not be missed. More so when 2016 has been a disastrous year when it comes to quality of films.