Bipasha Basu has established herself as the “Scream Queen” of Bollywood by now, having appeared in a spate of horror films in recent years. She is pining her hopes on ‘Alone’ which can give her career an extra push. Other than Bipasha, ‘Alone’ sees the Bollywood debut of TV heartthrob Karan Singh Grover. The promos and trailers of ‘Alone’ have promised a horror film filled with dollops of sex and skin show with extra doses of melodic music. We expect to be spooked by ‘Alone’. Does it fulfil those expectations?

Story: Sanjana (Bipasha 1) and Anjana (Bipasha 2) are Siamese twins who are literally joined at the hip. They promise each other that they will always be there for each other through thick and thin. But unfortunately, both of them fall in love with the same man Kabir (Karan). They go through a surgery to separate their bodies and unfortunately, Anjana meets her death in the process. Years later, when Sanjana and Kabir are happily married and they visit their erstwhile home Anjana comes back to haunt the both of them in spirit form. Alone, after that takes the form of a clichéd horror film and goes through familiar twists and turns. 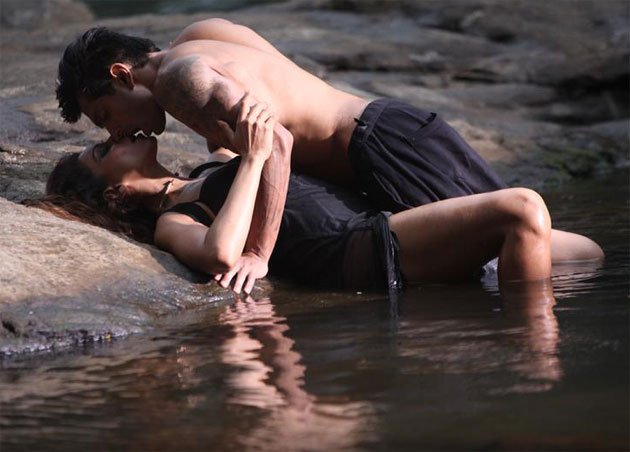 Bhushan Patel who directed the sleeper hit ‘Ragini MMS’ is back with the genre that he is familiar with. Whilst ‘Ragini MMS’ was a classier take on the horror genre, ‘Alone’ is sexier and more commercial. Bhushan does a better job at directing a horror flick than most of his contemporaries. Alone is a tolerable film and can even be enjoyed by the horror aficianados. What can confuse a general casual viewer is the confusion that comes across about which aspect the director chose to highlight – the sexy erotic angle or the horror angle. Bhushan tries to take the middle route but it is more of a miss than a hit.

The technical aspects of ‘Alone’ are very good. The production values are good and the film has been shot well with the scenic backwaters of Kerala looking beautiful.

‘Alone’ has the usual horror film soundtrack with a few romantic songs, one thrilling song with fast beats and even sneaks in an item number. Overall, it is a decent soundtrack.

Bipasha Basu is the highlight of ‘Alone’ because she plays both the villain and the heroine. That could have turned out to be a difficult job for her but she is a seasoned actress and is used to the tropes of horror by now. She does a fine job with both her roles. She is pleasing to look at as the sexy lead Sanjana and she scares us enough with her terrific transformation to Anjana the evil spirit twin! Karan Singh Grover is alright as the lead hero Kabir but he doesn’t really have a lot of material to work with since his only job seems to be to look good and show off his sculpted abs.